A journalist ripping how the Steele dossier was covered, the White House saying it would work with Facebook to flag ‘misinformation’ on COVID-19, and Rep. Jim Clyburn getting Four Pinocchios for his voter ID claim round out today’s media headlines.

When retired New York Deputy Fire Chief Jim Riches speaks about it, the anger and sadness in his voice is unmistakable.

It’s been nearly 20 years since his son Jimmy was among the 343 New York firefighters to die at the World Trade Center on September 11, 2001. The 9/11 terrorist attacks by Al Qaeda killed nearly 3,000 people, launched wars, and changed the world.

But since the January 6 Capitol riot, when a mob of Donald Trump supporters stormed the building to disrupt certification of Joe Biden’s election victory, some commentators and reporters have claimed it’s not just on par with the 9/11 attacks, but actually even worse.

Riches and other family members of victims told Fox News they’re disgusted when they hear of the two events even being compared, let alone suggesting the riot, while stunning and disgraceful, was the darker day.

Smoke pours from the twin towers of the World Trade Center after they were hit by two hijacked airliners in a terrorist attack September 11, 2001 in New York City.  (Photo by Robert Giroux/Getty Images)

“It’s a shame,” he said. “Are they kidding me? 3,000 people died, plus we have more people dying from the air that was down there … They’re comparing it to score points politically. The families are really [angry]. When I talk to them, when they compare it to that, they find that outrageous.”

It’s become a trend in some liberal circles since the riot to liken it to 9/11, citing that it was a direct attack on the democratic process. The widely condemned assault came on the heels of weeks of unsubstantiated claims of voter fraud by Trump and his supporters. Rioters smashed windows, beat law enforcement officers, and were heard voicing threats at Vice President Mike Pence, Speaker Nancy Pelosi, D-Calif., and other politicians.

Democratic lawmakers repeatedly intoned they wanted a “9/11-style” commission to investigate the Capitol attack. Left-wing pundit and former George W. Bush strategist Matthew Dowd recently argued the riot was worse because it’s divided the country. Lincoln Project co-founder and Republican-turned-independent-turned-Democratic strategist Steve Schmidt said not only that Dowd was right, but that the riot was worse because it would end up leading to a greater loss of life.

“The 1/6 attack for the future of the country was a profoundly more dangerous event than the 9/11 attacks,” Schmidt said at a town hall last week. “And in the end, the 1/6 attacks are likely to kill a lot more Americans than were killed in the 9/11 attacks, which will include the casualties of the wars that lasted 20 years following it.”

His group is now out with an ad directly comparing the two events.

On the scale of death and destruction, the two aren’t even remotely comparable. Thousands died on 9/11 as jihadists crashed three planes into symbols of American might, while a fourth crashed in Pennsylvania after heroic passengers interceded. One rioter on Jan. 6 was killed and four other deaths were tied to the assault, including Capitol police officer Brian Sicknick, who died of a stroke after being pepper-sprayed in the melee. Trump was impeached by the House on a charge of inciting an insurrection before being acquitted in the Senate after leaving office.

“It’s unfortunate because we’re coming up in the 20th anniversary,” said Debra Burlingame, whose brother Charles Burlingame was murdered while piloting American Airlines Flight 77, the plane that crashed into the Pentagon. “There are a lot of young people who have no living memory of 9/11 … When you have all these comparisons and analogies, which are inflated and ridiculous, it minimizes what actually happened, and that’s what’s happening here. It’s a deliberate ploy.”

A firefighter breaks down after the World Trade Center buildings collapsed September 11, 2001 after two hijacked airplanes slammed into the twin towers in a terrorist attack. (Photo by Mario Tama/Getty Images)

Burlingame penned a scathing Wall Street Journal op-ed about comparing the dates in May, noting the staggering “destruction and heartbreaking loss” on 9/11.

“It is deeply offensive and sad that the brutal and harrowing memories of the worst terrorist attack in American history are being deployed by political partisans,” she wrote.

9/11 ATTACKS: THE DEFINING IMAGES FROM THAT DAY OF HORROR

Joe Connor, whose cousin Steven Schlag was among the thousands who perished at the World Trade Center, told Fox News there’s no comparison.

“They just dehumanize our families for political gain,” he said. “I guess they call it gaslighting. They can say these things that will make people believe that these riots were worse than the worst thing that happened on American soil. Either they’re ignorant or they’re just really devious and clever, and you can put nothing past them, because if you’re willing to lie to that degree … It’s a disturbing trend to me.”

Connor watched the towers fall from his nearby Manhattan office. He tried to contact Schlag, a bond trader, and never heard from him.

“I saw people jumping out. I saw the sides of the buildings explode. I saw papers floating in the wind, and i tried to call my cousin,” he said. “No one picked up … The terror, the carnage, the horror of 9/11, 20 years ago. They’ve forgotten or they think the rest of us have forgotten.”

The rhetoric about the riot hasn’t been confined to political actors. In May, Huffington Post White House correspondent S.V. Dáte said the riot was worse because Usama bin Laden and his gang of terrorists “never threatened the heart of the American experiment.”

“The 1/6 terrorists and Donald Trump absolutely did exactly that. Trump continues that effort today,” he tweeted.

MSNBC PUNDIT MATTHEW DOWD: CAPITOL RIOT WAS ‘WORSE THAN 9/11,’ BECAUSE IT CONTINUES TO ‘RIP OUR COUNTRY APART’

The rant by Dáte was in response to columnist George Will’s call for the day to be as burned into the American memory as 9/11.

Don Arias, whose brother Adam died on 9/11 while working on the 84th floor of the South Tower, told Fox News it makes his “blood boil” that anyone of any political stripe would make that comparison.

“Clear thinking people see these inflammatory statements as the bulls–t they are,” Arias said. “There’s no comparison.”

“Both were shocking, serious and painful, but they were different in so many ways that trying to compare them with a rating of which is worse is a fool’s errand,” he said. “There is plenty to discuss and criticize with regard to the Capitol riot without rhetoric that lessens the harm and destruction of the 9/11 attacks.”

A military helicopter flies in front of the Pentagon September 14, 2001 in Arlington, Virginia at the impact site where a hijacked airliner crashed into the building.  (Photo by Stephen J. Boitano/Getty Images)

“Grizzly Joe,” a conservative radio host and former New York policeman, told Fox News in an email that the Capitol riot was bad enough on its own without invoking 9/11. Four of his friends who were killed that day are tattooed on his arm.

“Numerous criminals masquerading as self-styled ‘patriots’ (I call them ‘extremists’) fought with police officers and sullied the Capitol by virtue of the incursion,” he said. “It strikes me that if folks need to compare January 6 to 9/11, they have no faith in their ability to portray January 6 as the unfortunate criminal act that it was.”

Cornell Law School professor William A. Jacobson, a New York native, feels comparisons of the Capitol Hill riot and the attacks of Sept. 11 are “obviously over the top” but can’t fathom that pundits truly feel anything could be worse than 9/11.

“The people making the assertion likely don’t believe what they are saying,” Jacobson told Fox News. “The riot, while it obviously never should have happened, is being exploited by Democrats and liberal media.”

The riot continues to get fervent coverage as those responsible are protested and Congress investigates its root causes. Trump, who is blamed by critics for inciting the riot by insisting the election was stolen from him, has continued to insist he truly won it in the months since.

The family members of those who died on 9/11 don’t want to discount the significance of the Capitol riot, but they won’t want the memory of their loved ones to be cheapened either.

Riches’ son died on 9/11, but it wasn’t until March 25, 2002 that he and his three other sons carried pieces of Jimmy’s body out of the rubble at Ground Zero. More than 1,000 other families never got remains to bury.

In contrast, after the riot was quelled in January, the Senate finished its business that night and certified Biden as the president-elect.

Sun Jul 18 , 2021
TAMPA, Fla. — Derek Miller and his personnel at Smack Attire have been operating overtime since the Tampa Bay Lightning elevated a second straight Stanley Cup throughout their boat parade last Monday. “It was a ridiculous five hrs and considering the fact that then it’s been crazy,” Miller reported. Miller […] 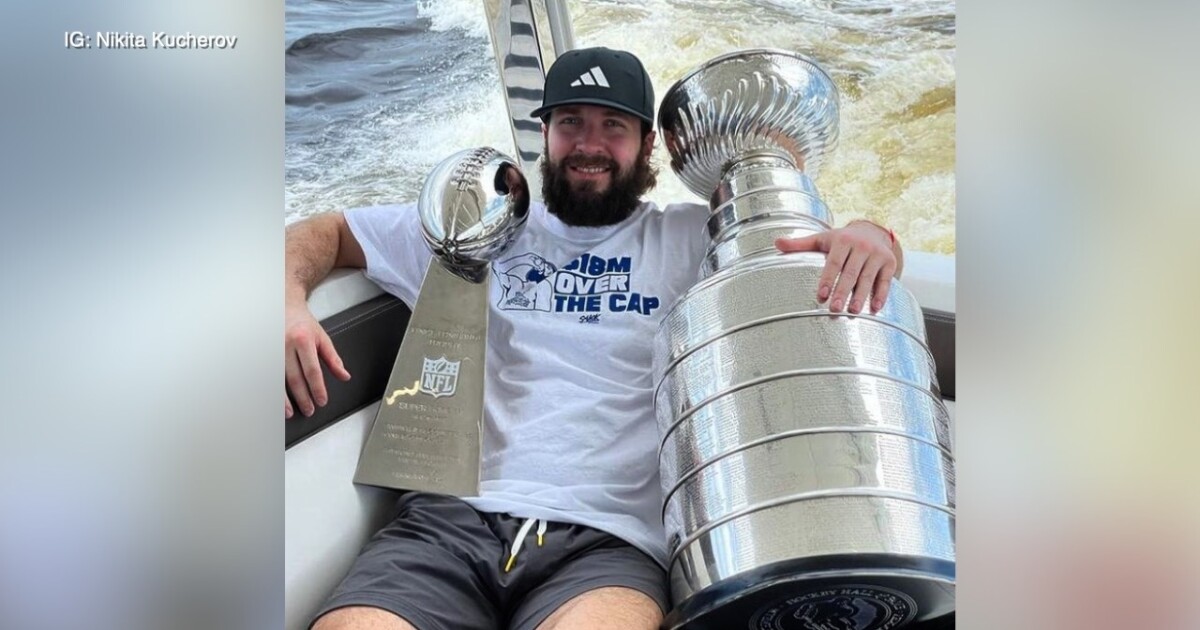